You Are Here:
Home
/
FAQ

This is the page where we have tried to answer the most frequently asked CaptionTools questions.  If you don’t find what you’re looking for, please submit a question through our Contact Form, and we will get back to you as soon as possible with an answer.

What type of media files can I upload?

CaptionTools accepts the following type of video and audio files that are under 500MB in size: mp3, mp4, avi, m4v, mov, m4a, and wav.

What if my video is larger than 500MB?

How do I convert video to audio?

Video editing programs can easily export these smaller files.  If you don’t have video editing software, you can use a free or paid media conversion software like Handbrake, Wondershare or Replay Converter.

There are also free online conversion tools, but they do require that you either link to or upload your media file, and they take more time.

What if I still want to edit the video?  Can I submit an unedited video and make the captions work later with the edited video?

No.  It’s best to wait until the video is fully edited, then submit it for transcription and/or alignment of captions.  Our system takes the audio track and time codes to make your file.  If you edit the video after alignment, the time codes will be off.  While it is possible to use our caption file editor to edit the caption file after an edit, it’s best to avoid that if possible.

Can I upload more than one media file at a time?

You can upload multiple media files and transcript files using our batch upload feature, found on the UPLOAD page. 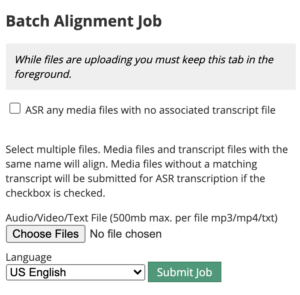 The media files and the transcript files must be named identically so they are matched during bulk upload.

If I submit an audio file for transcript alignment, is it possible to use the actual larger video file to open when I edit the caption file?  I’d like to see the video while I edit.

Yes, you can open the video file by browsing to it using “manage media files” instead of the audio file you uploaded.  It’s often helpful to see the video when editing the caption file.

What type of transcripts will CaptionTools accept?

It depends!  There are two ways to submit transcripts to CaptionTools.

(1)  Upload plain text files. US-ASCII encoding works best.  A .txt file may be uploaded together with the corresponding media file, or it may be uploaded   later, through the ASR Editor.   (To use the bulk upload tool on transcripts, they must be .txt files named exactly the same as the media files submitted.)

(2)  Copy and paste any text transcript into the ASR Editor.  This means you would submit your media file first for Automatic Speech Recognition transcription (ASR), and then you can replace the ASR text with your own test that you have copied from any document.  This means you can use text Word, RTF, Pages, Open Office and other text documents.  Using this “copy and paste” method preserves foreign characters, which are sometimes lost when a document is converted to ASCII format.

What if my transcripts are in Word and I want to save to ASCII .txt?

To save a Word doc or docx file as plain text with the proper encoding, follow these steps.

Inside the Word document, Click FILE —> SAVE AS, then choose PLAIN TEXT (*.txt).  Then if it gives you a warning that you may lose formatting, choose Text Encoding format of OTHER Encoding: US-ASCII (or ASCII on a mac.) Also, check the box called “ALLOW CHARACTER SUBSTITUTION.”

What languages are supported in CaptionTools?

When uploading a video or audio file, select the language primarily spoken in the audio track, from the following:

What kind of caption files can I download from CaptionTools?

How do I know what type of caption file I need?

Here are some common platforms and the file type they accept:

What if I need a caption file type that CaptionTools does not support?

Let us know what file type you need, and if it’s a common type or we have a large demand for it, we will add that file to our export list.

If you need to convert our SRT, VTT or Timed Text 1.0 XML to another format, there are some free tools on the internet that you can use to covert to any caption file type.  Our favorite is called Subtitle Edit.  It is a free download.